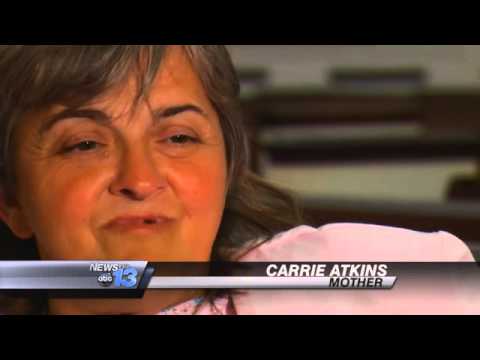 Christina Atkins, 11, of McDowell County was killed on Friday while at a friend’s house for a sleepover. It happened when she was riding a UTV with three other kids and it flipped.

“We never know when it’s going to happen. You let your kid go to a friend’s house,” Carrie Atkins, Christina’s mother, said. “You never know.”

Her parents, brothers and sisters say they are still in shock and have been numb for a few days now.

“She wouldn’t want me to be sad,” Christina’s mother said.

While the family is hurting, it helps knowing others share their pain and are right by their side.

“Everybody that I hugged I’ve seen in different parts of the county, but I never thought I’d see them all in one place,” Christina’s mother said. “That was amazing.”

So they’re hanging onto to her memory and who Christina became at such a young age.

“How precious and how vibrant and how bouncy and bubbly,” Christina’s mother said. “Just a very precious young lady.”

Many family members, friends, teachers, and classmates paid their respects, creating a line out the church door.

Christina was a sixth grader at West McDowell Middle School.

As for the investigation into this tragic death, it’s still ongoing. No charges have been filed at this time, according to the district attorney.

According to authorities, Christina was not wearing a helmet and the driver of that UTV was underage.

Listen to AnchorMOMS, the Podcast:

For all of the day’s top local and national news, visit
Watch our live newscasts and other live video at

Have a news tip? Send it directly to us: