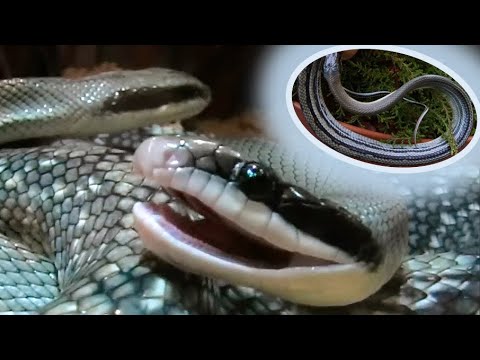 Cute shots of snake love! Interesting reaction and behavior of the male and female Vietnamese Blue beauty ratsnakes – they seem to like it)) This was planned and prepared: wintering – feeding – shedding – mating. Perhaps that’s why it went so quickly and intensely!))
About Blue beauty Stripe:
He’s not just rare snake, but one-of-a-kind snake. This mysrerious baby snake came out the last of the clutch (born August 2017). That was the first clutch from our pair. All his siblings had ordinary pattern. He was the smallest. But his eyes were bigger. He had so big eyes that barely fit on his head) In addition to the unusual pattern and size, his character is also very different from his siblings. Initially he was the angriest of all the brood of Vietnamese Blue beauty ratsnakes (Elaphe (Orthriophis) taeniura Callicyanous Blue beauty). But there were changes in behavior with age. His character softened to maturity.
Of course we want to find out whether the Stripe pattern of one of the babies from the first clutch is inherited or is the result of random mutations. Next broods didn’t have any such baby, so now only Stripe’s offspring will show the possibility of the genetic inheritance of the Stripe pattern morph of Blue beauty ratsnakes.
Snakes are awesome!
#snakegenetics #Bluebeauty #Stripemorph #snakebreeding #snakemorphs #raresnakes