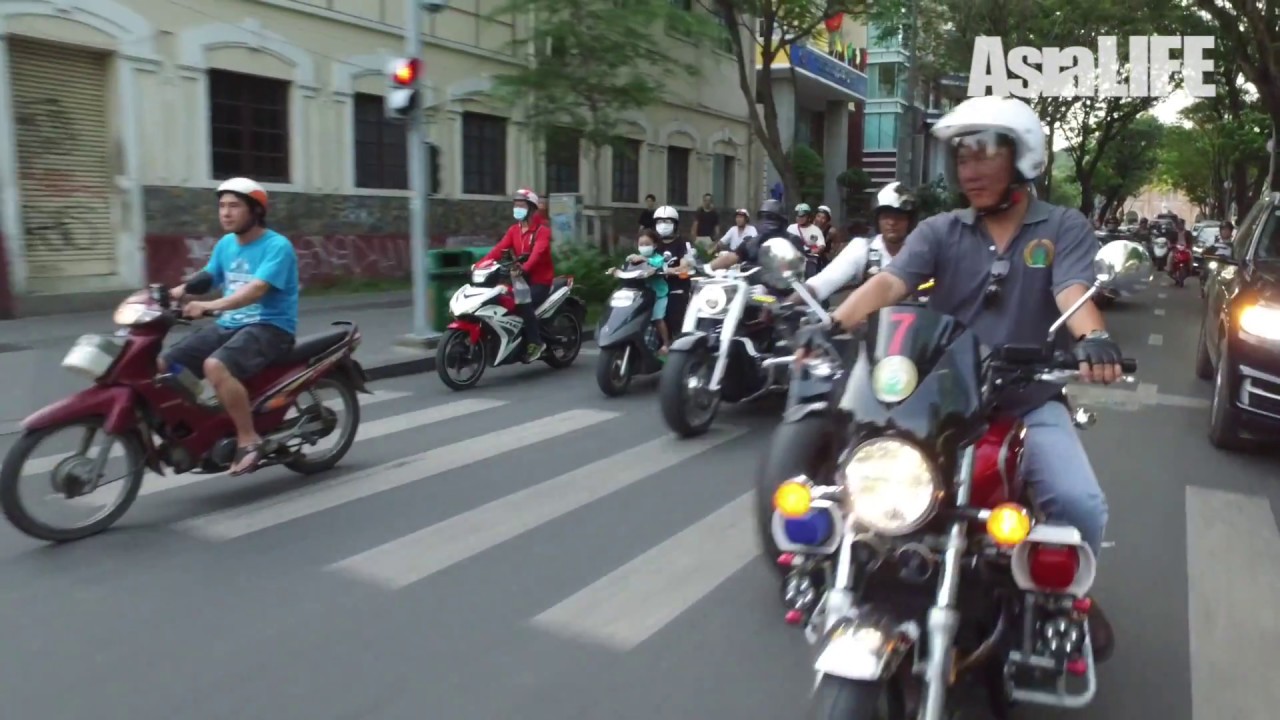 Barbara Adam investigates Ho Chi Minh City’s biker subculture. Photos by Jonny Edbrooke.
Tuan’s leather vest gleams in the blazing sun. He stands in front of a row of Harley-Davidson motorbikes, legs astride, mysterious behind sunglasses and three-day stubble. A quintessentially American rebel, on a steel horse he rides.

This is the weekend Tuan, a badass who rumbles along the open road with his band of biker brothers.

Ironically, Tuan is not American. He’s not even that much of a badass. On weekdays he’s known as Dr. Nguyen Anh Tuan, legal expert.

Tuan is the secretary of the Saigon Chapter of the Harley Owners Group (HOG), which meets every Sunday at the Harley-Davidson showroom in District 7.

The club has about 40 members, and 14 have turned up today to practice for the Harley parade to mark the chapter’s fifth anniversary. There are more than 1,400 official HOG chapters around the world, each one sponsored by a Harley-Davidson dealership.

Everyone at the Sunday ride has that Harley “look”. Leather vests with patches denoting their club, and their position. Jeans. Boots. Sunglasses. They all stand with their feet far apart. There is a sprinkling of bandanas.

There are only a handful women here, wives, girlfriends and dealership staff, most sporting Harley merchandise. Tuan says the women are planning to start their own chapter, called Ladies of Harley. Under the HOG rules, five members are needed to start a chapter, and the men and women are kept separate.

The Saigon chapter is an active one, with weekly meetups and regular rides. Some rides are daylong, ranging from 100 to 250 kms from Ho Chi Minh City. There’s also longer multi-day rides, which usually have some form of charity element.

Earlier this year, the Saigon Hogs rode to Gia Lai, where they distributed school supplies to local children.

Vu Hoang Nhu Y, also known as Joy, works at the Harley-Davidson dealership. She occasionally rides with the HOGs but is in two minds about actually buying one herself.

They’re also heavy, Joy says. And she sees how the people react to Harleys that are parked in public. “People will just come up and sit on the bike, to take a photo,” she said. “They don’t ask permission. They might damage the bike, or hurt themselves.”

Rajith Navindra is the only HOG member at the Sunday meetup who doesn’t speak Vietnamese. Hailing from Sri Lanka, Raj has worked in Vietnam for two years, in the fashion industry.

He takes his V Rod Muscle to the HOG meetup every Sunday. “I feel very strong when I’m riding,” he says. “And I like the sound.”

Tristan Ngo, one of AsiaLIFE’s columnists, also loves the growl of the big bike.

“The noise is great,” he says. “The loud pipes save lives. For me, it’s a distinctive sound that kind of calms me.”

Tristan, who owns and operates three restaurants during the week, has a Sportster Iron 883. He doesn’t get out on the bike as much as he likes. But he’s here today, in his leather vest and jeans, ready to ride.

“For me, the Harley is just about cruising,” he says. “It’s not about racing or speed, even though they’re powerful bikes.”

Tristan also likes the way the road clears when he’s riding his Harley.

“When I go down the road on my Harley, people part ways, like the Red Sea,” he says. “When I take my wife’s bike out, people don’t get out of the way. They even cut me off! No one cuts me off when I’m riding the Harley. Once they hear it, they swerve out of the way.”

For Jonathan Le, being a HOG is about more than just the bike. “It’s about friendship,” he says.

“Look at this guy here,” he says, slapping a young man on the back. “He’s been in Vietnam for two years and made no friends. But he bought a Harley two months ago, and now he has us!”

The young man is Jason Mai, the youngest member of the Saigon HOG chapter, at 25. Jason moved from the United States to Ho Chi Minh City two years ago to set up a poke restaurant, called Poke.

He has been the proud owner of a Harley Fourty eight for two months, and he loves it.