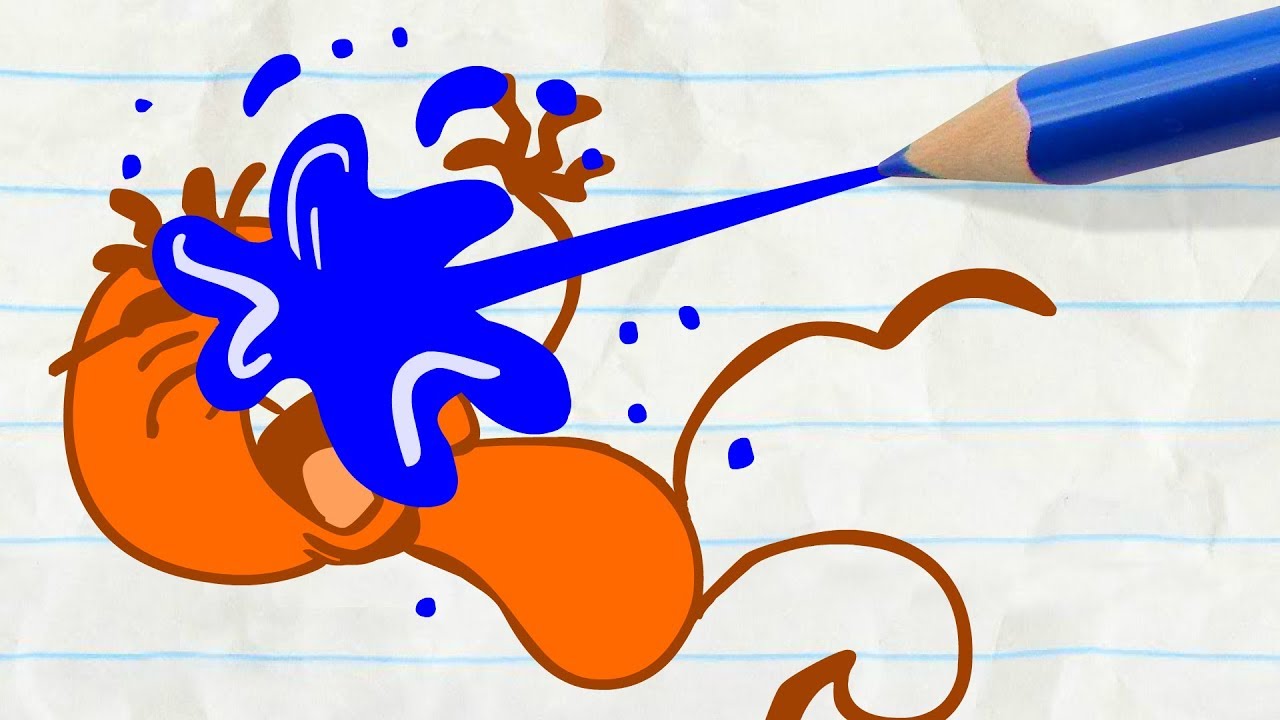 00:00 – Washed Out
Pencilmate gets introduced to water….a LOT of water!

02:03 – Mayday! Mermaiday!
Pencilmate meets the mermaid of his dreams. She can swim, he can row but unfortunately, neither of them can fly… or can they?

04:55 – Door to Door
Pencilmate fits through all the kind of doors.

07:41 – Checked Out
Ever been in the slowest check-out lane at the supermarket? We have, all the time. And so has Little Blue Man.

08:28 – Steak Mistake
Pencilmate is very hungry for meat… but is steak a mistake?

13:28 – Hand Off
The Pencil is trying out some new styles for Pencilmate. No legs? No hands? We’re not sure he liked any of them.

19:18 – The Lamp Champ
Pencilmate loves the spotlight but it is a harder beast to tame than he previously thought.

21:07 – Splitting Hares
Pencilmate gets a magic hat and… the white rabbit that comes with it!

23:29 – The Texas Seesaw Massacre
Pencilmate discovers that playing on a seesaw can hurt…a lot. // Pencilmate loses his head playing seesaw.

26:10 – The Olympic Games
Classic mythtory…what could the first ever Olympic Games have looked like? Medusa, Homer and the Cyclop star as judges.

30:30 – Peril of the Bells
Christmas carolers and a stubborn tree drive Pencilmate crazy as he prepares for (what used to be) his favorite day of the year.

32:43 – The Love Bug
What if the love bug was indeed a big gross bug that your girlfriend fell in love with?

37:00 – O Pencil Where Art Thou?
Where is the Pencil? Pencilmate finds himself missing him and looking for him. Good or bad idea?

39:12 – Funny Phone
Can landlines and cell phones found a common ground? Maybe but with a high health risk for Pencilmate.

42:11 – Clowning Around
Pencilmate has a big red nose. And everyone but him thinks it’s funny. What can he do?

44:22 – Love at First Write
When new and old ways of communication make (or maybe break?) a couple.

47:37 – B-Ball Basket Case
Pencilmate has a nice round head. Perfect for basket ball, isn’t it?

49:58 – Bugged Out
No one likes a bug crawling on them but what if the bug really likes you?

52:04 – Dawn on the Lead
Pencilmate finally gets his hands on a pencil!!! What will he draw?

54:31 – Catson Pawlick
A bouncy little kitty decides to help a painter make a masterpiece! Never neglect your pet’s input in your artwork…

About Pencilmation:
Pencilmation is a cartoon channel for not-too-serious grown-ups. It is made with love and a lot of fun by an international team helmed by Ross Bollinger who started the channel alone in his room a long time ago. Follow the new, wacky, and often times quite silly adventures of Pencilmate, Little Blue Man, Pencilmiss and other toons every Tuesday and Friday.